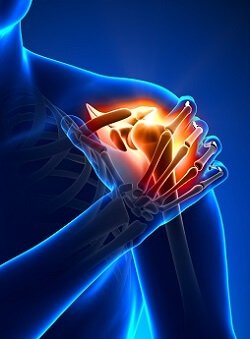 Burning shoulder pain can be extremely unpleasant. It may be there constantly or come and go, affect a small area or travel down the arm or even in to the neck or back. It often affects how well you sleep.

Here we will look at the most common causes of burning pain in the shoulder and the common features of each, such as associated symptoms and typical age groups affected.

This will help you identify which one is most likely to be the cause including how to tell whether it is a shoulder problem or actually something wrong in the neck, a common cause of burning shoulder pain.

Burning shoulder pain can be caused by:

Here is a simple guide to help you work out if your burning shoulder pain is due to a shoulder problem or a neck problem:

Pain in neck, shoulder and/or down arm, often into wrist and hand

Pain mainly in shoulder or upper arm, not usually below the elbow

Eases with rest, worsens with movement

As most cases of burning pain in the shoulder tend to be due to an issue in the neck, we will start there, and then go on to look at possible shoulder problems or other medical conditions that can cause burning shoulder pain.

Often, burning pain in the shoulder is actually caused by a problem in the neck or surrounding nerves. Even if you haven’t noticed any pain or stiffness in the neck itself, it may be what is called “referred pain”, meaning that the pain is felt in a different location to the source of the problem.

The neck is made up of seven bones, known as vertebra, that sit on top of each other like a curved pillar – imagine a stack of cotton reels.

In between the bones are flexible ring shaped structures known as discs, which have a thick outer layer of cartilage, annulus, and inner gel-like material, nucleus – imagine a jam donut.

Burning shoulder pain is typically due to nerve irritation from one of the following:

Pressure on the nerve root due to problems in the disc is a common cause of burning pain in the shoulder. Shoulder pain from disc disease may be caused by:

Disc Bulge: When the central gel-like portion of the disc (the nucleus) protrudes out placing pressure on the nerve root

Disc Herniation: A tear develops in the discs outer layer allowing the nucleus to leak out, collecting around and irritating the nerve root – imagine squashing a donut until the jam escapes out.

Disc herniation is commonly, and unhelpfully, referred to as a “slipped disc” – the disc itself does not pop in and out, it is firmly held in place, it is only the nucleus that leaks out

Disc Degeneration: As we age, our discs dehydrate, becoming less plump, less flexible and weaker – think now of a stale donut. It provides less space between the vertebrae, less cushioning, doesn’t adapt as well to movement and it is more likely to get damaged, any of which can lead to pressure on the nerve root

Burning shoulder pain that is due to disc disease in the neck usually:

Spinal stenosis is another possible cause of burning shoulder pain. This is when there is abnormal narrowing of the spinal canal, the gap in the spine for the spinal cord. This places increased pressure on the spinal cord and nerve roots. 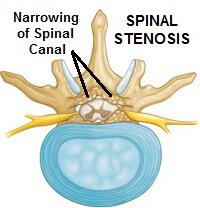 Symptoms of spinal stenosis usually start to appear when the spinal canal space has decreased by around 30%. Limited space at the side of the canal affects the nerve root, whereas central narrowing affects the spinal cord.

Cervical stenosis can be extremely serious if there is too much narrowing of the spinal canal and the spinal cord is affected. In severe cases, surgery may be needed.

Brachial neuritis causes weakness and a sharp, burning pain in the shoulder, shoulder blade, arm and hand. It is caused by inflammation of the brachial plexus, a collection of nerves that travel from the lower neck, across the front of the chest, to the arm pit.

Brachial neuritis can be a hereditary condition, i.e. from a gene mutation, or due to a problem in the immune system e.g. following an illness, surgery or immunisation. 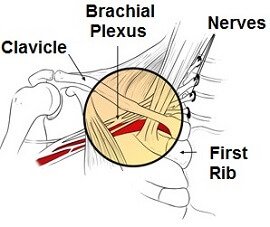 Treatment usually involves a combination of strong painkillers, physical therapy and exercises. Find out more about the causes, symptoms and treatment options in the Brachial Neuritis section.

Neck arthritis, aka cervical arthritis or cervical spondylosis, is another possible cause of burning pain in the shoulder caused by wear and tear of the neck bones and discs. As we age, discs start drying out, become weaker and lose height. The smooth surface on the bones gradually wears away and bone spurs form, narrowing the space around the vertebrae which can place pressure on the surrounding nerves.

Neck arthritis is extremely common affecting around 80% of people over the age of 60, but many of those don’t experience any noticeable symptoms.

Most cases of cervical spondylosis respond well to medication and physical therapy.

Whilst most cases of burning shoulder pain come from the neck, it may also be indicative of a problem in the shoulder itself.

The two most common shoulder problems that cause burning pain in the shoulder are bursitis and tendonitis: 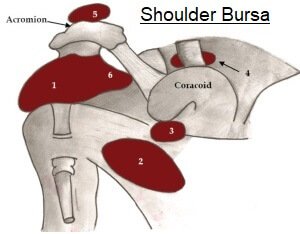 Burning pain in the shoulder that is fairly localised may be from shoulder bursitis. Bursa are small fluid-filled sacs that sit between soft tissues and bones, allowing smooth, friction-free movement.

Irritation of the bursa from excessive pressure, injury or repetitive friction can lead to inflammation which can cause burning shoulder pain. There are a number of different bursae located around the shoulder and shoulder blade which may be affected.

Another cause of burning shoulder pain is tendonitis when there is degeneration and or inflammation in one of the muscle tendons, such as the rotator cuff or biceps tendon.

This is usually caused by repetitive friction on the tendon, usually from repetitive activities such as throwing, racket sports or manual labor, excessive pressure from the surrounding structures e.g. bone spurs, muscle weakness and/or poor posture.

Symptoms of shoulder tendonitis usually include the following:

Other Causes of Burning Shoulder Pain

There are a few other conditions that can cause burning shoulder pain: 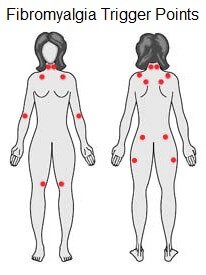 A condition where a chemical imbalance in the brain and problems in the way the central nervous system processes pain signals lead to widespread aching/burning pain, hypersensitivity, stiffness and fatigue. Fibromyalgia commonly affects people between the ages of 30-50.

Burning shoulder pain from fibromyalgia will usually be accompanied by pain in a number of other joints as well as shown on the diagram here.

Restless arm syndrome is a condition where there is a problem in the central nervous system which causes abnormal movements e.g. spontaneous jerking movements and strange sensations such as crawling, tingling and burning shoulder pain.

Usually affects both arms and may also affect the legs. Find out more in the Restless Arm Syndrome section.

The gall bladder is a small sac that stores bile from the liver. Problems in the gall bladder such as inflammation or gallstones can cause burning pain in shoulder.

Symptoms of gall bladder problems include intense abdominal pain which may refer to the shoulder, particularly around the right shoulder blade, chest pain, nausea and heart burn and often feel worse after eating.

If your burning shoulder pain is accompanied by a rash, it may be that you have shingles. The pain may be quite intense. Only one side of the body will be affected.

Burning shoulder pain that starts when you wake up may be due to having slept awkwardly. One of the shoulder muscles or nerves in the neck may have been irritated causing burning pain in shoulder. The pain will usually settle down after a few hours/days – gentle stretching exercises can help – visit the arm stretches section.

Delayed onset muscle soreness (DOMS) can cause burning pain in the shoulder. If you have suddenly increased you activity level or taken up a new sport, this may be the problem.

Any new incidence of burning shoulder pain should be checked out by your doctor to enable a clear diagnosis and effective treatment. If the burning pain in your shoulder is due to a neck problem, physical therapy is often advised to work on strengthening and stretching exercises as well as postural advice.

If your burning shoulder pain is due to a problem in the shoulder itself, you may benefit from a combination of strengthening and stretching exercises – visit the shoulder exercises for a whole range of exercises that can help.