So many of us are obsessed by the thought of a thinning thatch that’s it’s easy to forget that baldness isn’t a man’s only worry when it comes to his barnet: thick, wavy and generally unruly hair can all present problems, too.

And having a Don King hair day can affect more than just your appearance. According to a study by Yale University, men who aren’t happy with their hair tend to be more self-conscious, more self-critical and less sociable than their well-coiffed counterparts. Even the thought of a bad hair day was shown to affect self-esteem dramatically.

Before you literally pull your hair out, remember that there’s no such thing as ‘normal’ when it comes to the stuff on your head — just the hair you happen to have been dealt: hair that’s unique to you. And what makes it unique depends on its structure.

Hair varies in thickness — from 50 microns (a unit of measure equal to 1 millionth of a metre) in people with fine hair to over 100 microns. Thickness also depends on the number of individual hairs on your head.

How the hair behaves depends on the shape of the individual shafts. Asian hair, for example, is often round, so lies flat and straight; Caucasian hair is slightly oval, which tends to make it fine with varying degrees of waviness; and Afro-Caribbean hair is flat and curved, giving it its distinctly curly appearance.

What’s more, hair density — how many individual shafts there are on the head — is affected by its colour, with blondes having the most hair and redheads the least.

“Half the battle is learning how to work with the hair you’ve been given,” says Wendy Lewis, author of Hair Affair. “You may know best how your hair behaves, but getting it to look healthy, shiny and manageable can take a little knowledge.”

To that (split) end, this guide is here to help. Whether your mop is wavy, curly, frizzy, thick or just refuses to lie flat, we have a battle plan to defeat any kind of bad hair day.

In the same way that it’s hard to sympathise with a billionaire who complains about the price of maintaining his yacht, it’s hard to feel pity for a man who complains his hair is too thick. But if you’re that man in question, a thick thatch can be a constant source of annoyance.

“With thick hair, the main issue is manageability and the sheer volume of the hair,” says Jaymarie Winkler, a store manager at the new Ruffians barbershop in London department store Liberty.

How To Style Thick Hair

If the hair is especially thick, ask your barber or stylist to take some of the weight out using special thinning scissors. “This can help if your hair is very thick, but avoid doing it if your hair is also coarse, as it’ll make it fizzy and even more unmanageable.”

It’s also worth allowing the hair to dry naturally whenever possible since blow-drying can increase volume, making it look even thicker. If blow-drying is essential, stick to a cool setting.

What Products To Use For Thick Hair

Not volumising mousse, for one. Thick hair benefits from styling products that provide hold without adding volume or stickiness, so Winkler suggests stocking up on clays or pastes.

According to Paul Morgan, a master barber at Jacks of London, a good moisturising shampoo is also essential, as is a decent conditioner. “They’ll stop hair drying out and keep it in good condition, which is important because if hair is dry the cuticles [the outermost layer of your hair] will remain open and it will seem even thicker and straw-like.”

Conditioners also help keep thick hair manageable and result in a sleeker and less voluminous look. “Moroccan Oil is excellent for thick hair as it moisturises and, with prolonged use, can change the texture and soften the hair,” says Morgan. Around 40 per cent of Caucasian men have slightly wavy hair, and if you’re one of them, you’re in good company —David Gandy, Orlando Bloom and Roger Federer are three well-known men who know how to ride the waves.

Like curly hair, the wavy stuff can appear bulky and tends to react to the weather — with the wave becoming more pronounced at times of high humidity or when there’s drizzle in the air. Additional waves can also sprout in places you’d rather they didn’t and get knotted and tangled if your hair is long.

How To Style Wavy Hair

“Rather than a bad thing, in many respects, wavy hair is the holy grail of hair types,” says Winkler. “Pretty much all styles work, but anything pushed back really shows off that wave. If your hair is thick as well as wavy, though, your barber can take some of the some of the bulk out with a razor or thinning scissors without risking frizz.”

Particularly good cuts for guys with wavy hair include the undercut (where the sides and back a keep ultra short with the hair worn long on top), the public school side part (where the fringe falls forward) or loose and tousled (think Jon Snow or Harry Styles). Just remember: the longer the hair, the more pronounced the wave, so if control is your aim, keep your hair under three inches or so in length.

To tame longer wavy hair that tends to be a bit unruly, Morgan suggests tying it up loosely overnight. “Taken down in the morning it will have a natural, messy, wavy look — very low maintenance and effortlessly cool.”

What Products To Use On Wavy Hair

“I recommend a sea salt or volumising spray to give a bit of oomph before styling with either a glossy pomade or a styling paste,” says Winkler.

You can maximise (and look after) your waves with hair products designed to define and enhance curls and waves while reducing the mad scientist look with an anti-frizz serum.

If you really want to wave goodbye, you can always temporarily remove them with the help of a pair of ceramic straighteners. If your cut is particularly short, opt for a model with smaller plates as these offer greater precision — which is the difference between smouldering looks and second-degree burns. 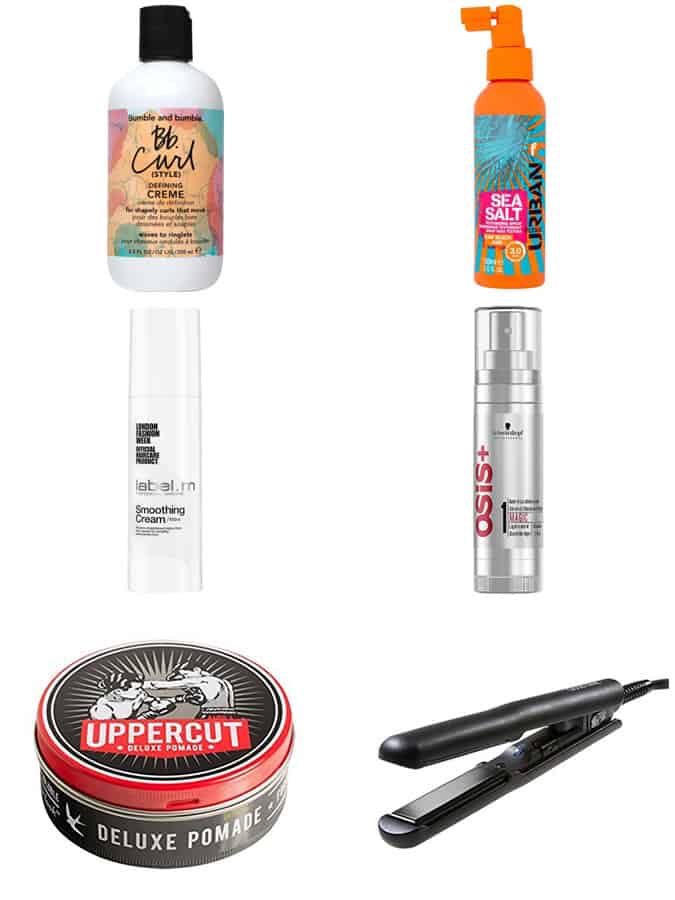 “Curly hair is curly because the follicle that it grows from under the scalp is not straight,” says celebrity hairdresser and trichologist Guy Parsons. Typically, curly hair is more coarse in texture, and the coarser the hair, the less water it holds and therefore the dryer it is.

“It also absorbs light rather than reflects it, so it doesn’t tend to look as ‘shiny’ as straighter hair would,” says Parsons. “The other downside is that it can become frizzy in humid weather, which is why it’s important to use products that create a protective shield around it.”

How To Style Curly Hair

A lot of guys find caring for curly hair overwhelming, neglecting it to the point of comedy 1980s scouser (“it’s certainly not the easiest hair type to manage,” admits Parsons).

You have three options: fight it by keeping it cropped (which is how Justin Timberlake tackles his notoriously curly mop top), remove the curls with a relaxing treatment, or — and this is by far the easiest and most authentic option — you can just make the most of what nature has given you. After all, it’s not as if there aren’t plenty of poster boys for curly hair: think James Franco, Adrian Grenier and Carlos Valderrama. Okay, so maybe not Valderrama, but you get the idea.

“To maintain and define curly hair, ask your barber for a flat, layered cut to create a full, curly finish,” advises Morgan. “You don’t want too much thinning or texturising to take place.” A curly undercut (short at the back and sides, long and curly on top) always looks good, as does a curly quiff and hair grown to jaw-length a la Aiden Turner in Poldark.

Whatever style you choose, make sure you get it cut or shaped when dry. Curly hair is more relaxed when wet, springing back a little when dry, so having it cut this way guarantees the style and length you want.

What Products To Use On Curly Hair

“Product choice is crucial for curly hair,” says Morgan, who recommends a moisturising shampoo to prevent hair becoming dry and frizzy alongside a styling product like Moroccan Oil Moulding Cream. “It can be applied to wet hair and, as it’s incredibly moisturising, is perfect for curly hair,” he says. “It will help to define the curls and give good hold.”

When you’re in a knot, pick up the right tool, too. Hair can be kept tangle-free by using a brush designed specifically for thick and curly hair; these have flexible teeth that gently detangle and smooth down the hair’s cuticles while minimising damage. Equally, drying hair with a hair dryer featuring a diffuser will help protect the hair and define curls without making them frizzy.

Just remember that using heat on curls — along with alcohol-based sprays and mousses — can make already desert-dry hair even drier, so don’t forget to reverse the effects with a moisture-rich, non-volumising shampoo and occasional deep conditioner. Like young children, hair can be obedient and well behaved or unruly and defiant. Since your head of hair is unique, chances are it’ll have its own kinks and quirks. Most of these you’ll have embraced and learned to live with, but a couple — cowlicks and double crowns, namely — can be particularly problematic.

Crowns are (mostly clockwise) whorls of hair that form at a central point at the back of the skull just down from the top of your head — but some people have two of these, creating a ‘double crown’. These can be tricky for barbers to deal with because they have to deal with two centres of growth to style around.

Cowlicks, meanwhile, are small sections of hair that go against the general direction of hair grown on the head to create gravity-defying tufts that stick up and defy most attempts to tame them with products like waxes and pomades.

“If you have a pronounced double crown, you have to commit to either a long, very choppy or short style,” says Winkler. “Longer will weigh the crown down, making it less noticeable, and going short and choppy will hide it.” Anything in between and you’re asking for trouble, with different sections of your hair growing noticeably apart.

The easiest way to deal with a stubborn cowlick is to go for a short, spiky or textured style that works with it rather than against it, disguising the hyperactive hair in the process.

What Products To Use On Unruly Hair

There is no magic potion that can help here. However, a few styling techniques can aid in making things easier.

For example, blow-drying can temporarily change the direction of hair growth if cowlicks are a problem, while growing the hair longer can help by weighing it down.

Interestingly, washing the hair less frequently is also a good hack as the natural oils will weigh the individual strands down at the root. Now Watch: 8 Grooming Hacks That All Men Should Know